2021 marks the 37th year that Wilson and Scott have provided the blue line for the London Marathon, being the only company to have done so throughout the marathon’s history, this is an event we are all proud to cater for.

To mark the occasion, I spoke with Steve Scott, Chairman of Wilson & Scott, about the history of our involvement in the event.

“In 1984, we were approached by John Disley, co-founder of the marathon, as he wanted to make improvements with the race. He and Chris Brasher saw a blue line to indicate roads used during the 1979 New York Marathon, and they thought it would be a good idea to implement this in London. The blue line serves a dual purpose today, also showing the shortest route for the elite athletes.

The marathon was moved to Westminster bridge in 1982 and, whilst deciding on alterations to the route, John saw one of Wilson and Scott’s crews busy at work. He took down the phone number on our wagon and gave Steve Scott a call.

There were a few prerequisites with the line for the marathon; it had to be put down quickly and taken off after the race and we couldn’t use white or yellow as these were colours used across the country already. Thus, the blue line was used.

It is also an intermittent line. This is because, if you paint continuously and put a kink in it, it will look terrible on TV. You can have some deviation in the line with gaps; it also reduces the paint needed and time taken.

At the time, the new major sponsor of the marathon was Mars, based in Slough, whose neighbour was ICI paints. They asked ICI to develop a temporary paint for our use in the marathon. Conveniently, ICI had recently invented a product to coat new cars, instead of waxing cars from the factory -as had been done- this new product was a film that could be removed with a detergent. They pigmented this film blue and then we trialled it.

The temporary paint worked well, we could spray a detergent which softens the resin and then we could wash it off. We trialled this in our yard and then had to do an official trial in London. All the boroughs the marathon went through had to approve the use of this paint.

There were two official trials. One in Tooley Street, and one on the Isle of Dogs (at the time just open dockland). Approval was given by all councils. We first lined the marathon the year after, in 1985, and have done so ever since.

In 1985, the organisers insisted that the lining was to be done on a Saturday night. We worked through the night and finished lining at 6 am on Sunday, with the race start at 9 am. It made more sense to paint on a Friday night, which left a fallback in case weather was bad and we couldn’t paint.

Most years, we have painted on Friday night and taken the line off after runners on a Sunday. We have only ever reverted to Saturday twice after the first year.
In our first year of lining, Ingrid Kristiansen broke the women’s world record and she thanked us via telegram for providing the line. (Below) 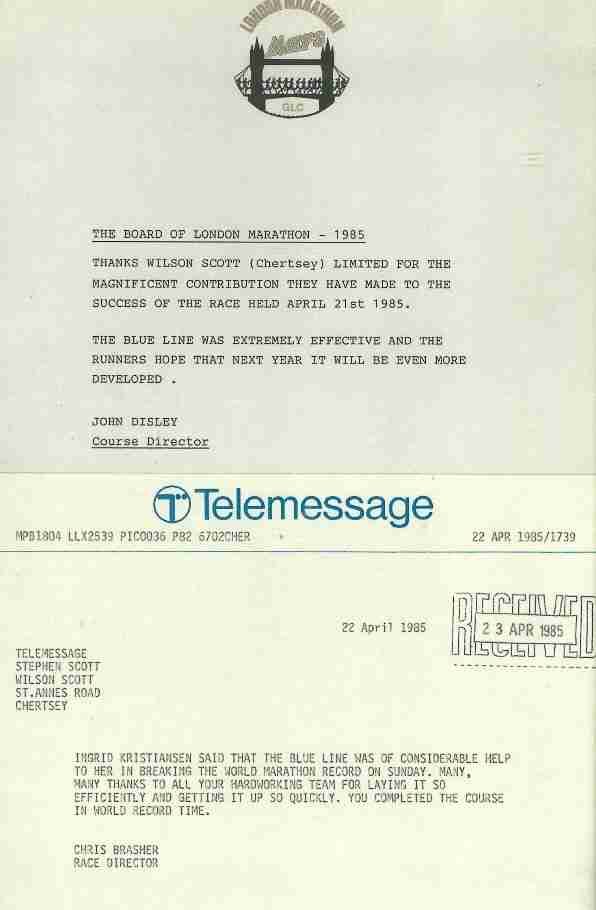 As well as the London marathon, we have also done Berlin twice, Amsterdam, Milan, Birmingham, a multitude of half marathons and student games, and have been asked to do the 2022 commonwealth games. We also lined races for the 2012 Olympics.

Even in 2020 we did the line for the elite’s only race around St James’ Park.

The first year we did the Berlin marathon, it was still in East and West Berlin as the wall only had a hole in it and it had not yet been knocked down.”

Over the company’s 70-year history, investing and promoting new technologies have been a key part of the work we do. The continued contract that we have with the London Marathon showcases this ethos, and we hope for many more years providing the temporary blue line that leads so many to break records and run to victory. 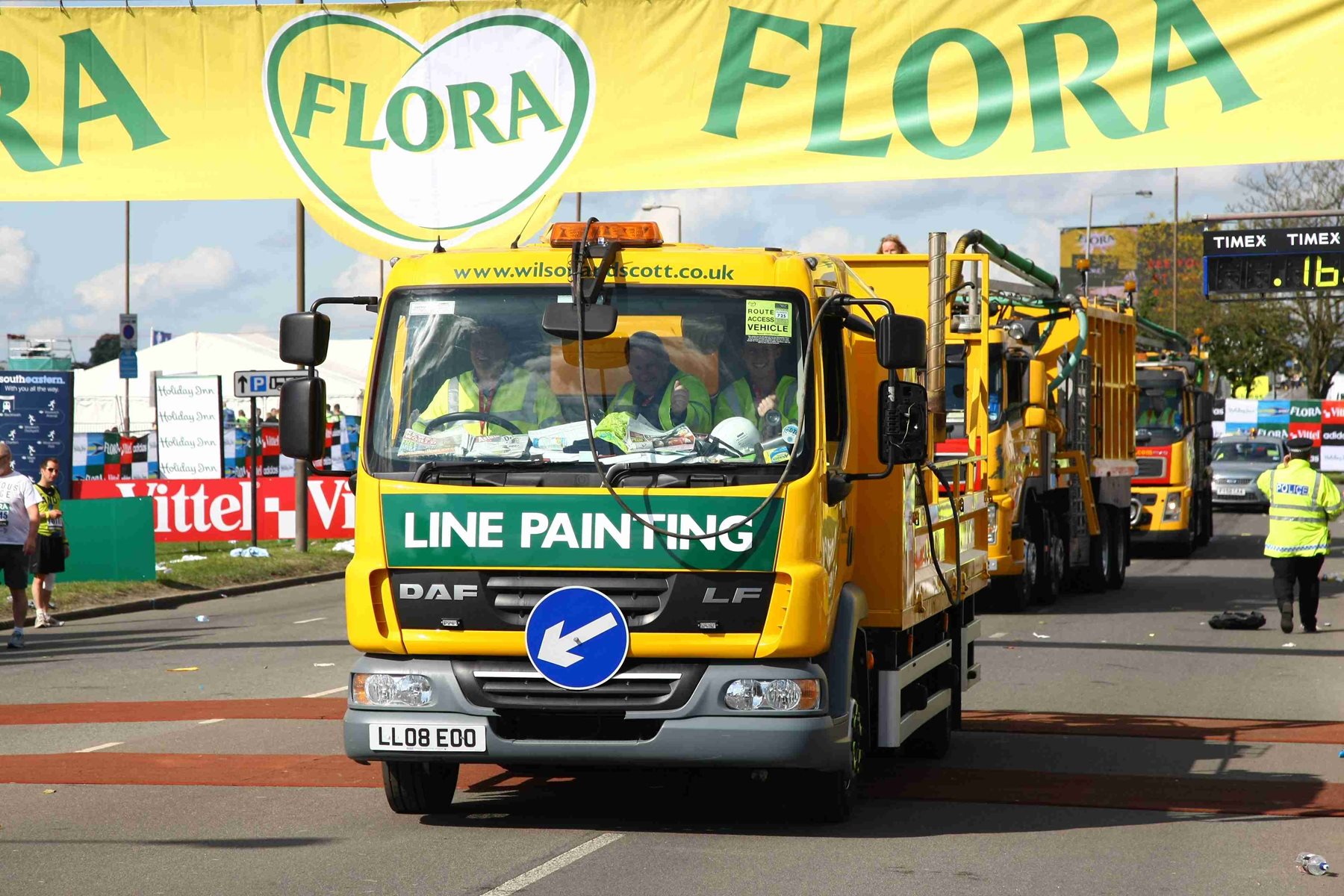 Crossing the finish line in 2009 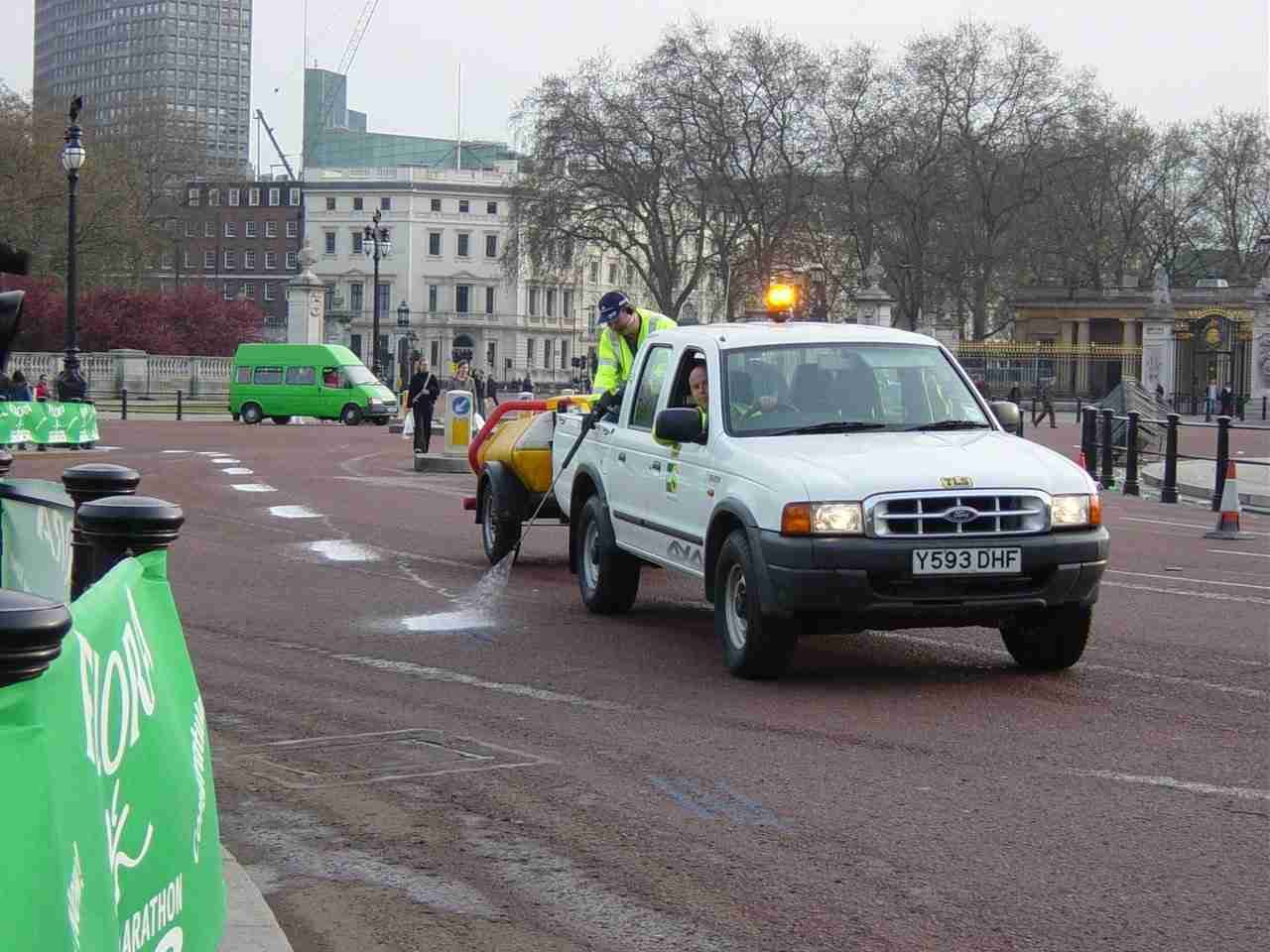 Adding detergent near the Mall, 2003 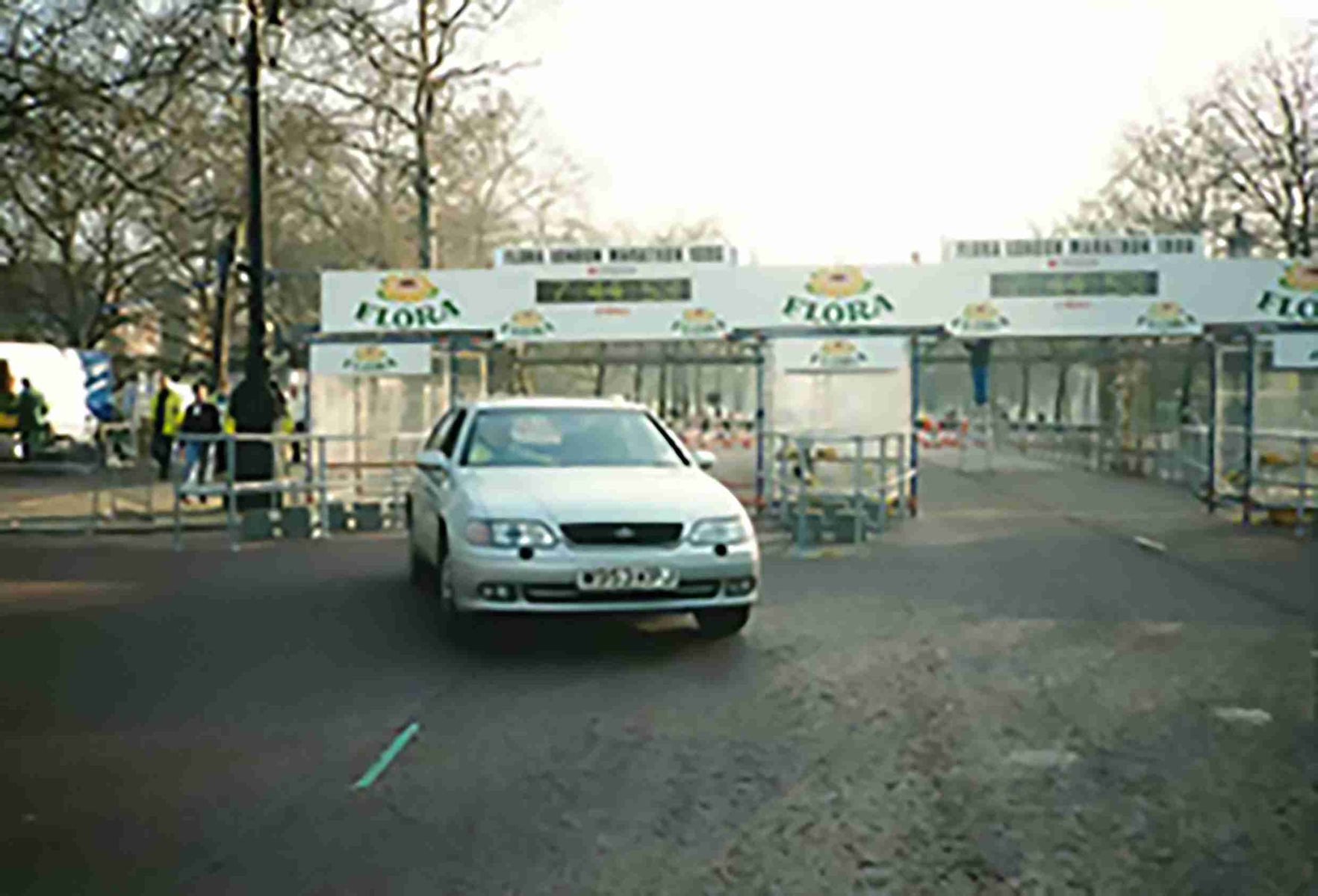 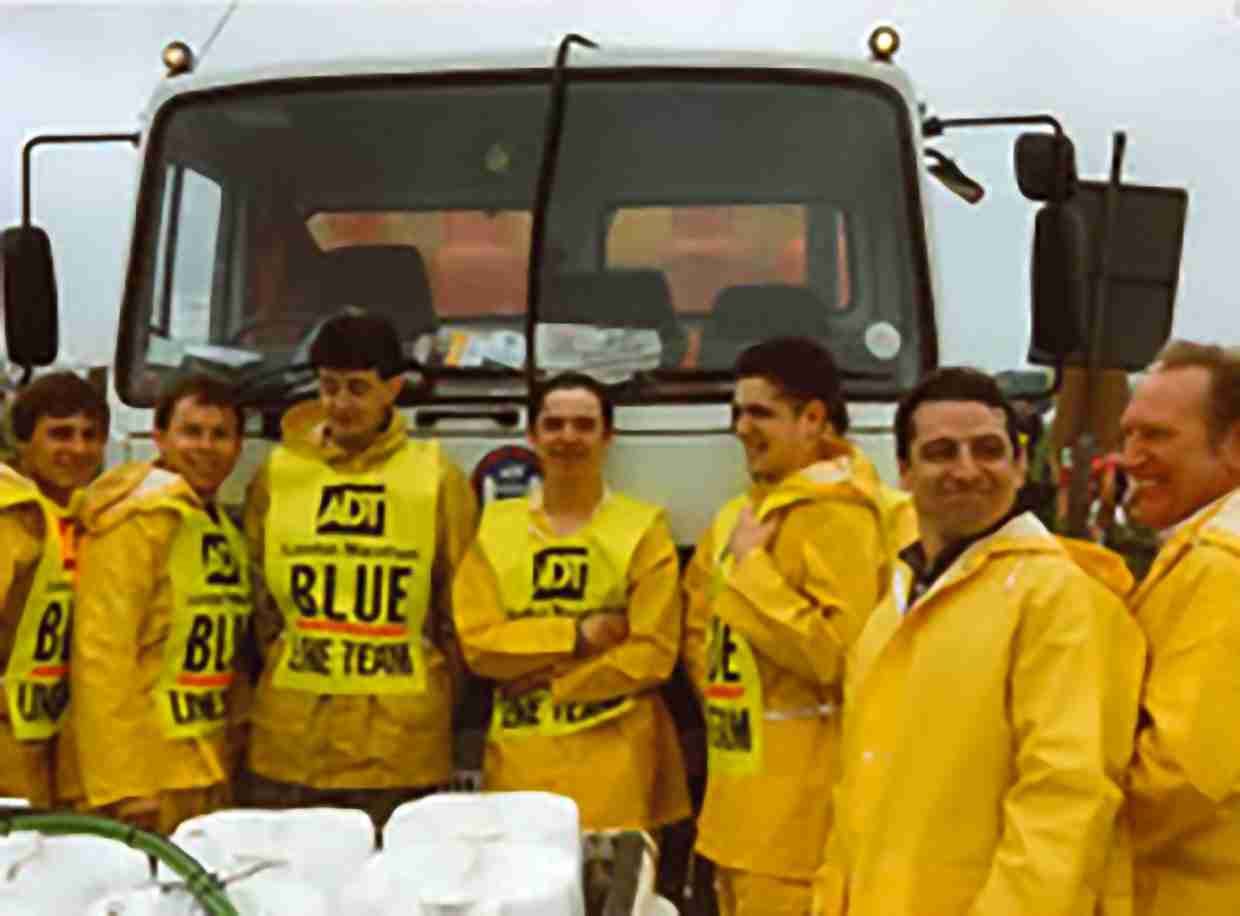 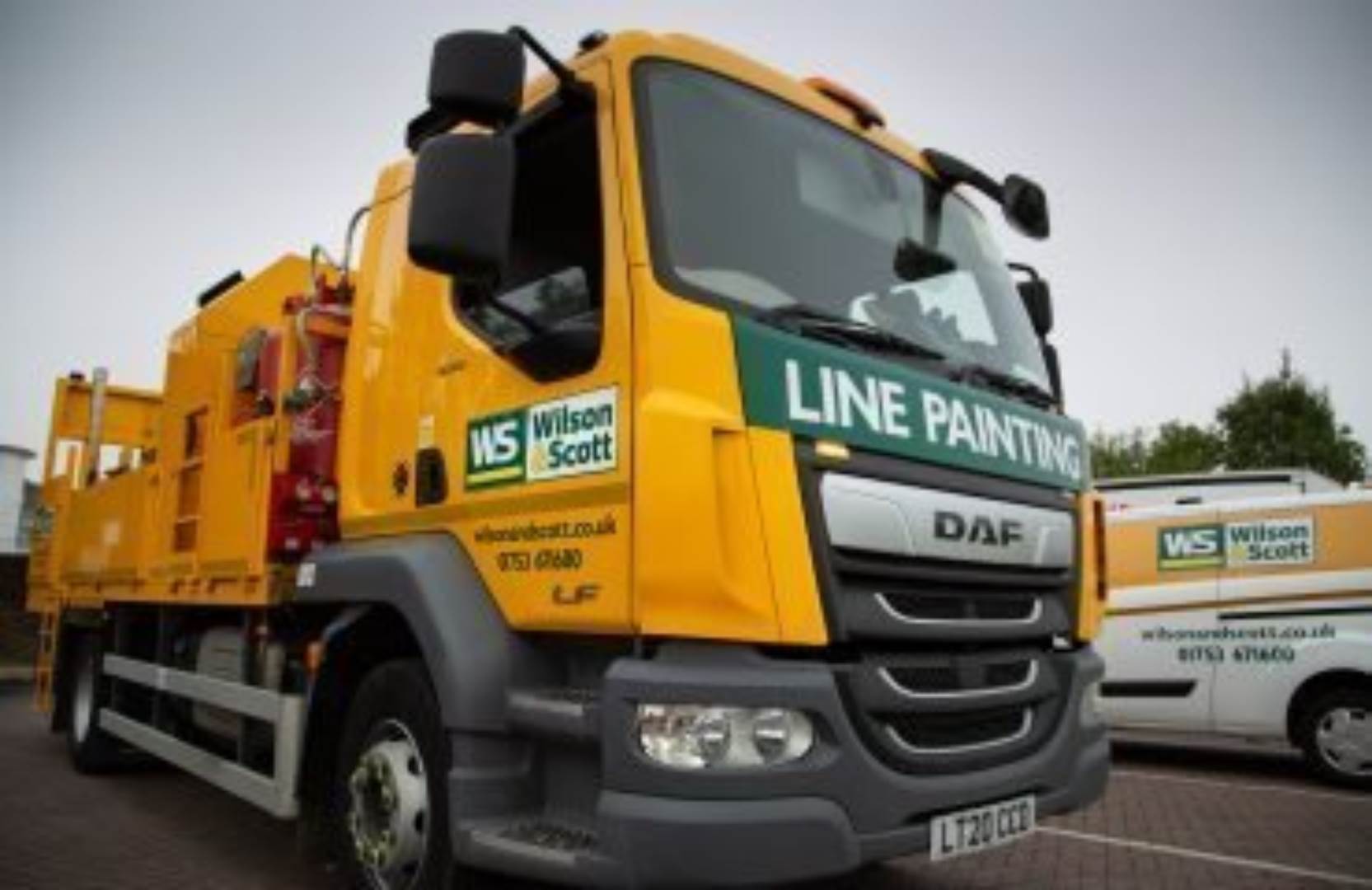 Delivering during an Emergency 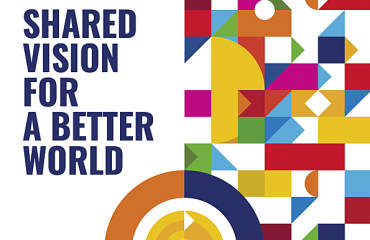 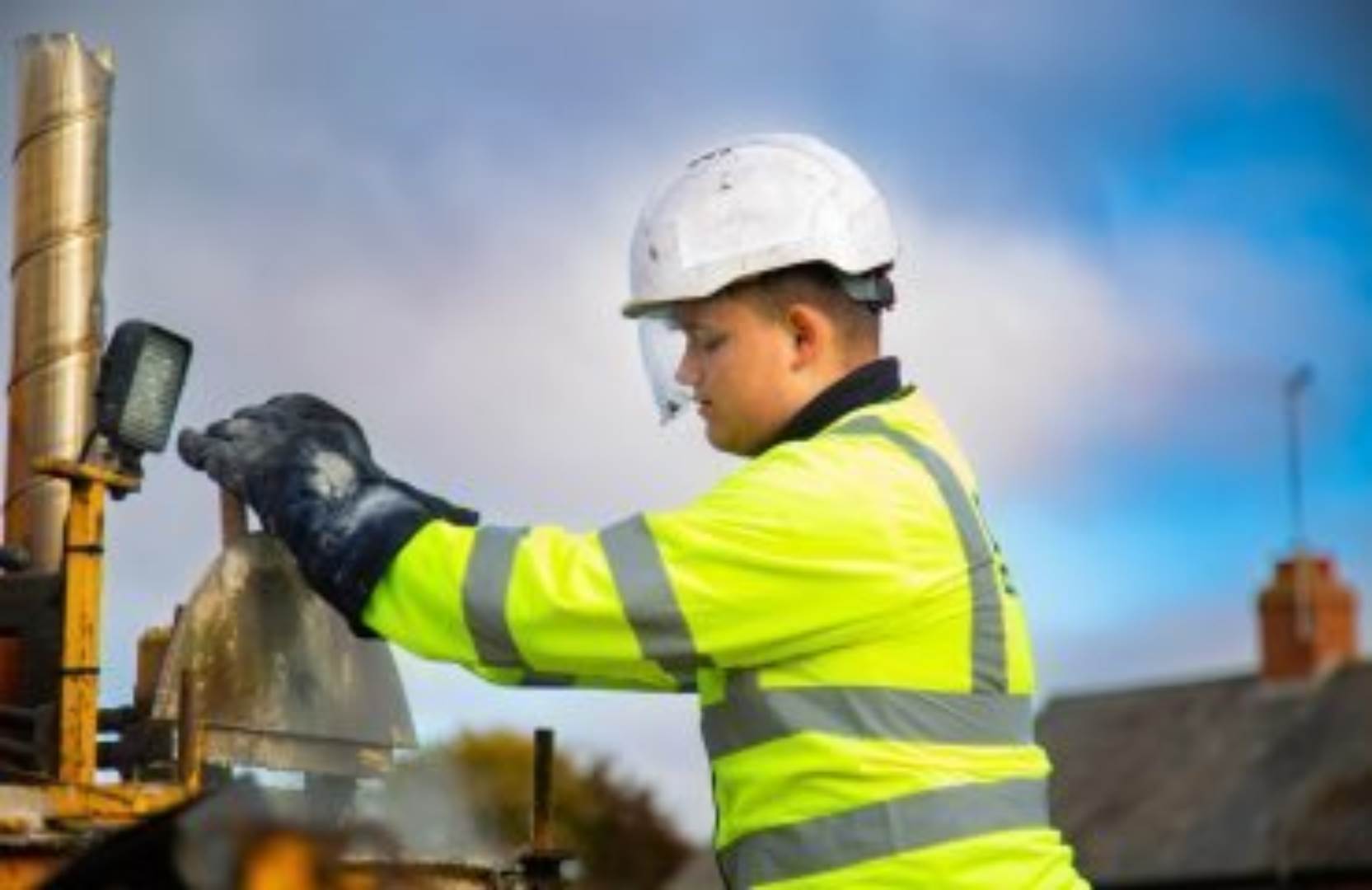 Insight to the Industry